In 1612, English colonist John Rolfe introduced the cultivation of a special strain of tobacco for export to England, which was much better-liked by the Europeans than a harsher form which grew naturally in Virginia. As his tobacco became a cash crop for the struggling colony's economy, he established a plantation estate at Varina Farms about 45 miles upstream from the first settlement at Jamestown and across the river from Sir Thomas Dale's 1611 settlement at the progressive community in Henricus. Henricus was developed as a potential replacement for the shortcomings of the Jamestown location.

Varina Farms Plantation was named for a mild variety of the tobacco from Spain which was similar to the non-native strain Rolfe used in developing his successful product. The plantation became the home of Rolfe and his second wife, Rebecca (Pocahontas), Chief Powhatan's daughter, head of the Native American Powhatan Confederacy for two years following their marriage in 1614. It was the birthplace of their son, Thomas Rolfe in 1615.

As "Varina Plantation", an 820-acre (330 ha) property was listed on the National Register of Historic Places in 1977. At that time it included two contributing buildings and one other contributing sites.

In modern times, Varina Farm (as it is now called) is still actively cultivated as a working farm, and is privately owned. However, the site of the former town of Varina can be seen from Interstate 295 to the east just north of the Varina-Enon Bridge. 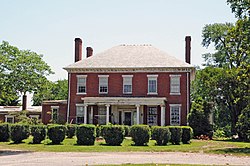 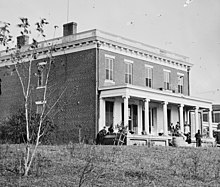