Built for Nathaniel Welch, a native of Virginia, by Almarion Devalco Bell in 1858.

Nathaniel Welch was born in Madison County, Virginia on November 24, 1814, the son of the Reverend Oliver Welch, a Baptist minister. Oliver Welch was a founder of the Alpine Baptist Church. He built the simple two-story hewn-log house at his homestead nearby, known as Kingston, upon his arrival from Virginia in 1832.[3] The Welch family was intermarried with the Reynolds family, of the now-destroyed Mount Ida nearby.[4] 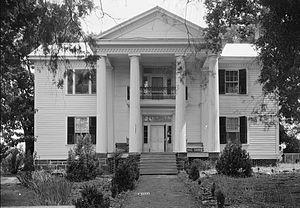